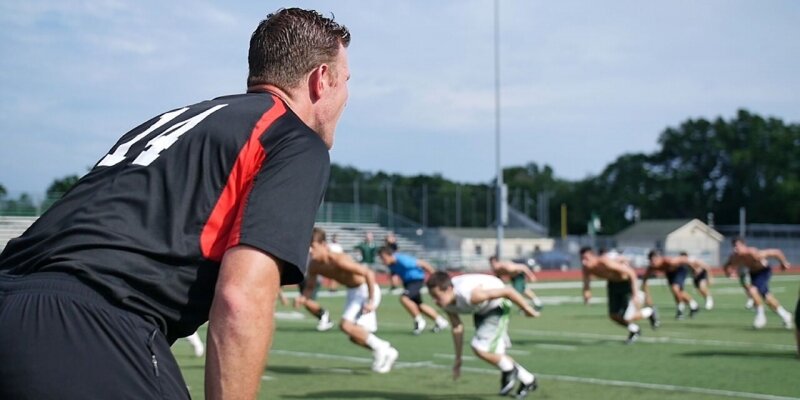 Many coaches believe that acceleration and top speed training are entirely different. Maximum velocity training can be seen as something super complicated and hard, but if we look at it from a different lens, the application of force, and what’s happening from the hip, knee, and ankle is not really that much different. I’d even go as far as to say a change of direction is not all that different either. When we talk about getting the slack out of the body and extension of the hip, that applies to acceleration and top speed as well. So, under that notion, if we are getting our athletes better at linear speed, we are also improving agility and overall athleticism.

It’s not just warming up! That’s why we call it movement prep, and not just a warm up. Preparing for any activity should be directly related to the goal of the session.

Linear speed warm ups should map back to the movements and drills you are going to do during the session. If your warm up has a lot of sideways runs, cariocas… then it’s not preparing the athlete for a linear speed session. These are great movements in general, but especially if you are tight on time, you want the athlete to get the most out of every minute of the session.

For example, skipping during the warm up – whether the hands are behind the back or overhead – will help the athlete begin to improve their posture control.

Pogos are a great tool for linear speed movement prep, when performed correctly. Many athletes will just bounce around on their toes, almost like jumping rope, when the goal is really to get the dorsiflexion of the foot at the point of contact. I see a lot of flexion at the ankle, which is NOT what we want (lack of stiffness). We reinforce the concept of lower leg stiffness beginning with the warm up.

The drills are great, but how are they impacting an athlete’s overall training? If we consider the A drills (A March, A Skip, A Run), the knee and the thigh lift in time with the opposite leg extension is very important for a lot of athletes. Many coaches may only be looking at the knee lift to make sure that’s in place, but what is happening with the other leg? This is where a lot of athletes struggle.

Cueing to “lift the knee” is easily understood, but you’ll probably also see the foot flatten out, the ankle will give, the knee will flex too much. When going through these drills, remember the goal is to TRAIN the athlete, not just drill them. It’s easy to lift your knee, it’s hard to strike the ground – BOTH need to be addressed for improving overall athletic performance.

The problem for running faster is not just applying more force, but more force in a shorter time and in the right direction. The solution is to prepare the next stance leg BEFORE initial contact. Returning to the typical A March, athletes need to be in the position to “whip from the hip.” When it comes to sprinting, the hip is the prime mover and helps an athlete attack the ground. You’ll see a lot of athletes stomp with their feet when you tell them to apply force, as opposed to getting the hip more into the action. Think of a whip – the end of the whip doesn’t do the work; it’s the handle. The hip is the handle of the leg.

Another concept is “swing and scissor”.  Think of spreading scissors as wide as they can go. Now imagine your legs are the scissors. The ultimate goal is to get as much distance between the knees as possible – lift the front knee to the hip and fully extend the back knee putting force into the ground.

About the author : Kwame Dixon

Kwame Dixon is a 1987 graduate of the University of Pittsburgh, where he played football and earned a bachelor's degree in business administration. Coach Kwame Dixon entered his first season on the NCCU coaching staff as wide receivers coach in 2011 for Green Hope High School Eagles after spending the past eight seasons as a head football coach on the high school level. For three seasons (2005-07), Dixon served as head coach at West Johnston High School in Benson, N.C. In 2007, he led the Wildcats to a single-season school record seven victories (7-5), the school's first-ever state playoff appearance and the program's highest conference finish at second place in the Greater Neuse Conference. During the 2000-04 seasons, Dixon was head coach at Cambridge (Mass.) High School, where he posted the highest winning percentage in school history, recorded the most wins in a single season and was voted as 2003 Massachusetts Coach of the Year.